Training & Enterprise Councils (TEC’s) were established in the 1990’s. Through these, and as a part of the gathering recognition of the sector’s importance, significant funding came on stream to support start-up childcare providers for the first time. 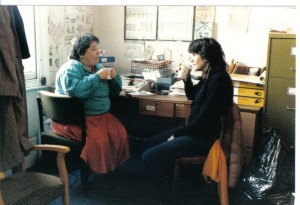 Funding secured through the Single Regeneration Budget allowed a Training Officer to be employed, who worked to expand and refine the BAND training courses.

To accommodate the growing staff team, 1995 saw BAND on the move again, this time to St Pauls. BAND  training courses had always been popular, and now with a dedicated officer and a new training room, new courses could be offered to more of Bristol’s Childcare workers. Using feedback from the member groups, courses were developed to reckon both with the practicalities of childcare and social issues.

In the later part of the decade, a new government arrived and with education famously central to its declared priorities it introduced the 1998 the National Childcare Strategy. Among the responsibilities this placed on local authorities  was  a requirement to establish Early Years Development & Childcare Partnerships (EYDCP’s) with relevant local bodies.

BAND was well placed to respond and played an active role in the Bristol EYDCP, holding a position on it’s Executive Committee from the outset.