BANDNEWS – BACK ISSUES: Cooking Corner: Ice Cream in a Bag

When summer comes, the days will be hot and balmy and we will all be longing for something to cool us down. Ice cream might seem like the obvious choice so why not give our ‘Ice Cream in a Bag’ recipe a go? Not only is it a yummy homemade treat, it’s also a great science activity with lots of opportunity for making predictions and observations and recording findings. Depending on numbers of children, you might need to make several bags.

• A large zip lock bag (about 4.5 litres/a gallon in size)
• A smaller zip lock bag ) (about a litre/a quart)
• Ice
• ½ cup rock salt
• ½ cup whipping cream
• 1 tablespoon of sugar
• Flavour: a few drops of vanilla or other essence or a squirt of chocolate or fruit sauce
• Spoon
• Printable record sheet to use before, during and after 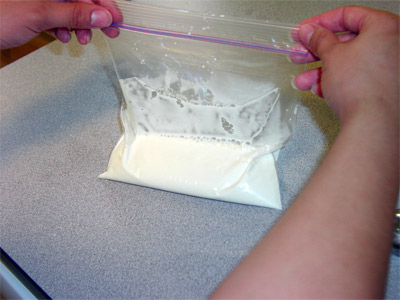 • Place the cream, sugar and any flavouring you are using in the smaller bag and seal it to ensure there are no leaks (you could put it inside another bag as well as a precaution).
• Fill the large bag about a third of the way with ice and add the salt.
• Place the smaller bag inside the larger bag. Add more ice so that it is about 2/3 full and seal.
• Children to take turns using their hands to continuously move the bag around for about 20-25 minutes.
• The ice cream should then be ready to eat and enjoy.

1. What state of matter is the mixture at the beginning of the experiment? How about at the end?

2. What happened to the ice in the large bag as you were making the ice cream? Why do you think this happened?

3. Why do you think salt is necessary in this activity?

What’s Going On?
Salt lowers the freezing temperature of water. When you add salt to your ice, you’re creating a mixture that is colder than just the ice itself. This colder temperature causes the mixture to freeze and become ice cream!

Want to go even further?

1. Experiment with different ratios of salt to ice and see how it affects the freezing of the ice cream.
2. Measure the temperature of the mixture before it freezes and after. Compare the two temperatures.
3. Based on this experiment, why do you think salt is sprinkled on icy roads in winter?

Spaced Out!: Space activities for kids

BAND TEAM18th February 2016Newsletter
Looking for an activity theme over the next few months?  How about focusing on space to celebrate the European Space Agency’s (ESA) six month ‘Principia’ mission. The mission began in December... ...
Read More

BAND TEAM19th September 2017Newsletter
BANDNews-Back issues: Short Changed? From MAY 2017 A lthough the national minimum wage and living wage levels increased in April, research by the DfE in 2016 and more recently by the Family... ...
Read More

BAND TEAM19th September 2017Events,NewsletterHealth
BANDNews-Back issues: Movement in Mind From MAY 2017 In recent years, we’ve heard a lot about the importance of playing outside and being able to run around for children’s development. Further neuroscience... ...
Read More

BAND TEAM20th September 2017Newsletter
Building Relationships Across Generations May 2017 Becket Hall Day Nursery and Osbourne Court Care Home have entered into an unusual partnership; for the last 5 months, a group of children from the... ...
Read More

This article is taken from BAND News -  our Newsletter which BAND members receive 6 times a year.